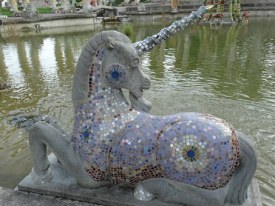 Now a ragged man in shabby clothes, Daryl, was unlike everyone else because he liked unicorns and loved to put posters of them in his room.  He was intrigued by the world of unicorns and he wanted to show the power of them, until he went bankrupt because he bought a concrete unicorn tiled with bright Fluro colours that was bigger than the Statue of Liberty.  Although he lost everything he owned, had nowhere to live, and only had the unicorn, Darrell was still overjoyed because he found his new home.  He climbed up the unicorn’s mane, swung into the mouth of the statue, and relaxed into the belly of the unicorn.  Now a man in shabby clothes lives in inside a unicorn.